Our planning on the fly continued. The internet does make planning a whole lot easier. But one problem with such planning is that the time we spent on the internet in El Remate mapping our next moves cut into the time we could have been exploring El Remate. That is the problem with having ONLY three weeks for this trip, not much down time for planning and random exploring.  When on the fly the cheapest and sometimes best method is to just show up at our next destination, look around, and pick the best spot to stay. This has also lead to memorable disasters, with no place to stay, so we chickened out and booked a room in Flores in advance.

After our tour of the Mayan ruins at Tikal we caught a bus from El Remate to Flores. Quaint and lovely Flores is chock full of tourists, once again mostly the European variety, with a few Americans thrown in the mix. We know we are on the tourist trail when we hear American voices.

Infamous Spanish Conquistador Hernán Cortés, known primarily for conquering the Aztec Empire in Mexico City, showed up here in Flores in 1525. He wisely moved on, as Flores was a stronghold of the Mayan peoples. It was not until 1697 that Flores was the scene of the final battle of the Spanish over the Mayans. On the ruins of this defeated Mayan island city the Spanish built a city in the style of their homeland.

The Spanish style includes tiny cobblestone streets. As there were no street signs we had a tough time finding our nice little hotel, Casa Itzayana. We walked by the “street” several times without realizing it. Only after retreating for a couple beers at a nearby restaurant did we find a kind woman who knew where it was. But as few people here speak English, we could not figure out her directions. She took pity on us and left her husband behind to guide us to the door.

In the cathedral is a statue of Cristo Negro, or Black Christ, a crucifixion scene. There are many of these Cristos Negros in Guatemala, statues of wood that turned black due to centuries of aging in the smoke of untold number of prayer candles. It was just our luck to arrive in town for the big annual Festival of Cristo Negro. At least we called it that, because our Spanish was inadequate to understand what people tried to tell us about it.

The perimeter road around the island is solid with restaurants, bars, shops, and other tourist attractions. But it is all old school and has a very local feeling. There were many little establishments that seemed to be total mom and pop operations. Luckily for Flores, it is too far from the ocean to ever be under assault by giant cruise ships disgorging hordes of passengers. The industrial tourism of cruise ships has been the ruin of so many famous places we have visited around the world. Luckily cruise ships will never ply Lake Petén Itzá.

Venice, Italy is just one of many famous cities in the world where local protests have  erupted against the cruise ship industry.

In Belize even the residents of the very touristy town of Palencia are trying to fight off cruise ships before they get established. Cruise ship companies and big corporations reap the profits, while the locals get all the headaches.

Tuk-tuks are perfect for navigating the narrow cobblestone streets of the city interior.

While the outer ring of the island is filled with tourist infrastructure, most of the interior is residential like this neighborhood. 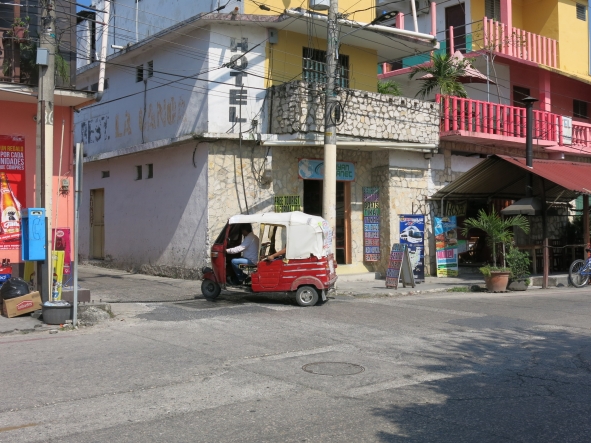 Lucky us, our hotel was just 100 feet from the center of town, next to the hilltop cathedral (Church of our Lady of the Remedies). We had no idea we would be at the epicenter of the Cristo Negro festival week. 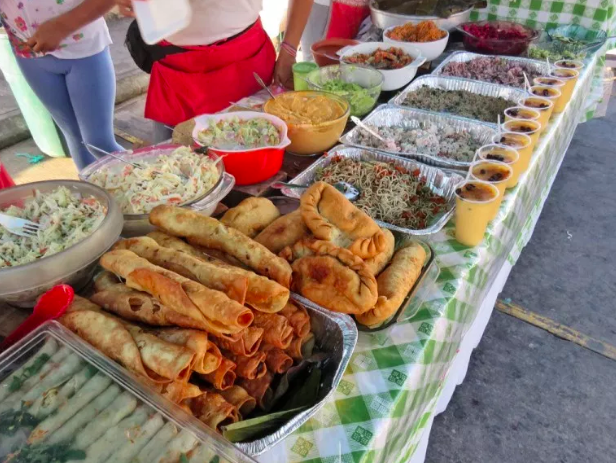 I was hoping for a little street food, but instead down by the waterfront in the main tourist area there was a smorgasbord of food at several stands. There was only one thing that kept me front completely gorging on all these savory dishes.

I had to save room for the piles of desserts. They really know how to cook and bake in this town.

There were big parades led by trucks with blaring speakers and police escorts. There were little parades with just a few marching marimba players. There was a brass band parade mid-day, and then a repeat brass band at 4AM for God knows what reason. Guatemalans are big on marimbas it seems. The six man marching marimba teams were impressive. Four guys carrying the marimba on poles, two guys side-by-side playing in unison, all marching down uneven, hilly, cobblestone streets. And every parade had several teenage boys whose jobs it was to light of prodigious amounts of firecrackers. 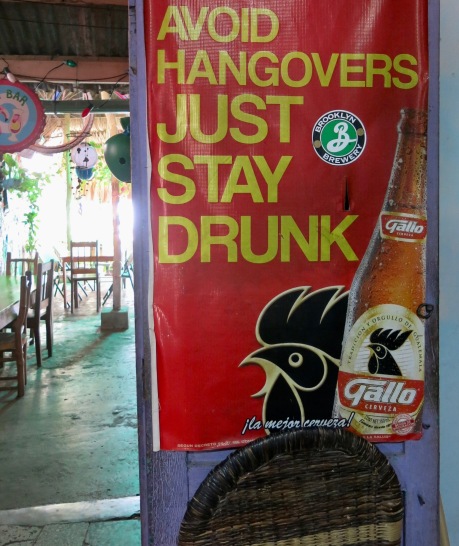 Gallo is the national beer of Guatemala. They once had 100% control of the beer market. Even now they still account for way over half of beer sold in the country. Responsible drinking campaigns do not appear to be part of their current marketing strategy.

What better way to promote responsible drinking than to have cute young women ride the Gallo beer truck in the parade passing out free beer along the way!

I am generally not a fan of parades, but if American parades had trucks passing out free beer along the way I might be more inclined to show up.

The next night there was a big celebration in the central plaza. Lots of music and several big bands. But almost no one danced. There was no dancing in the parades either, despite all the music and beer. Not a dancing culture I guess. The non-dancing culture oddly reminded us of our years in Kazakhstan, where there were big celebrations in the town square with lots of music, but no dancing. Sadly, Kazakhstan lacked the street food culture as well. And the friendly attitude to outsiders, beautiful scenery, easy transportation, and so much more.

All night at the plaza it was the job of a team of teenage boys to drop huge M-80 style firecrackers in a barrel about every five or ten minutes. After midnight we retreated to our hotel, but it still sounded like howitzers going off all night. The day after the big fiesta there was a municipal crew cleaning up the plaza. One minute there were a bunch of guys in green shirts pushing brooms, but then guess where they went midway through the project? 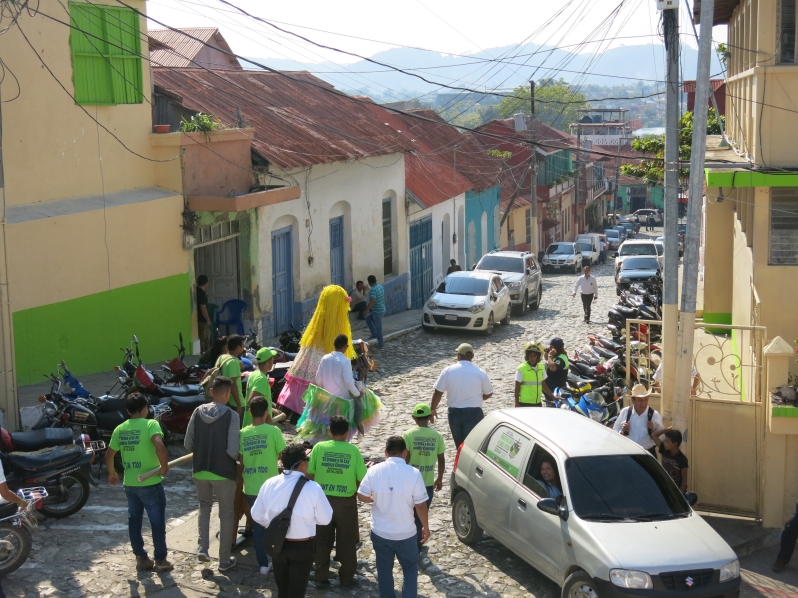 To have a parade of their own, of course. Six guys on the marimba, two in big costumes, and off they went around the town. Was this in their job description?

Our last day we took a walk across the causeway to the mainland, and took a break in a little park midway across. A young indigenous couple was there dressed in traditional Guatemalan clothing. Even our bad Spanish was no help, for it was not their native tongue either. Now I would never have asked them to pose with us for a photo, as I would think it to be culturally insensitive. But not this woman. She made it clear that she wanted us to pose for a photo with her. She probably went back to her village to show everyone how crazy the tourists dress in the big city.

In Parts 2, 3, and 4 of this blog series I ranted about how Americans need to get on the local buses and see the country with the locals. So now I have to confess that we found a good deal on a nice express bus with AC and tinted windows for the ride from Flores back to the Belize border. We saved many hours off the trip. Rather than sharing a bus made for 12 carrying 19, we had a bus for 20 carrying 13. Even so were the only Americans. Our fellow travelers included one friendly and informative local businessman, a young Scottish backpacking couple, plus a gaggle of eight young Italian women all backpacking together. No Americanos trying to get around with their matching three piece luggage sets. 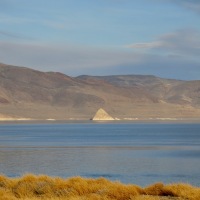 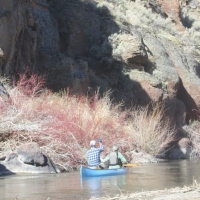