Surprise Canyon was named by three men,William L. Kennedy, Robert L. Stewart, and Richard C. Jacobs, stagecoach bandits who discovered silver in 1872 while using the canyon as a hideout. The canyon starts out tight and narrow but surprisingly widens at the top into a small valley. In this high canyon valley the silver boom town of Panamint City was born and died. If that’s not surprise enough, read on.

The trail to Panamint City begins at Chris Wicht camp. Now burned down, the camp used to be a hardscrabble mine. Plenty of surprise surrounds the camp, starting with the “Fuck U BLM” sign spray painted on one of the few remaining walls.

One recent visitor tracked down Rock Novack, the last resident of Chris Wicht camp, now the caretaker of the nearby almost ghost town of Ballarat. The visitor said Rock Novack told him that “the place kept combusting by itself. After the third fire, [we] let it burn to the ground.” When Rock was asked why they left the mine and camp, he said, “This canyon doesn’t like people.”    ( https://www.youtube.com/watch?v=xFDmJ80Mai8)

The next surprise comes as we start up the canyon: cottonwoods in the desert! Notice the rusted hulk of a road grader left partially buried in the gravel after one of Surprise Canyon’s colossal floods.

With desert all around, so much water is surprising, almost magical. 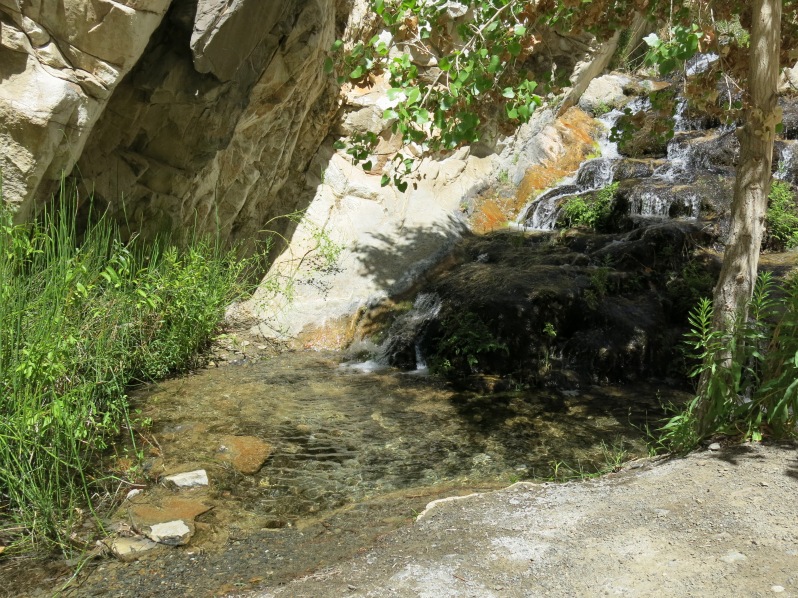 Although we’d read that the hike from Chris Wicht camp (~2000 feet) to Panamint City (6280 feet) was a grueling 5 miles, we weren’t prepared for such a hideous slog in the nearly 100 degree heat. The trail is mostly loose gravel. The 4,000+ feet gain in elevation is constant and gradual, an easy trail when viewed from the comfort of your chair, but surprisingly steep when on foot.

After the initial discovery of silver in 1872, Panamint City boomed and became home to several thousand people. Buildings lined the canyon; Main street was 1 mile long. The boom lasted 4 short years. A flash flood washed the entire town away in 1876. Turns out there wasn’t that much silver anyway. Most miners left and the town was never rebuilt. Surprisingly, the chimney from the old smelter is still standing.

Apparently some silver-bearing rock is blue. Who knew!

Here’s another surprising thing about Panamint City. In addition to the mining ruins, there are several rock shelters along the canyon where you’ll find Coso style pictographs. The one below shows longhorn cattle (thus dated from post-European contact). Sadly, we didn’t realize these pictographs were in the area on our visit to Panamint City, but we’re not hiking back up the surprisingly hot and hideous canyon to find them now.

The canyon walls above Panamint City are full of trails leading to old mines. The trails are wide and strong enough for mule or donkey pack trains. They’re in great shape even after more than 100 years. 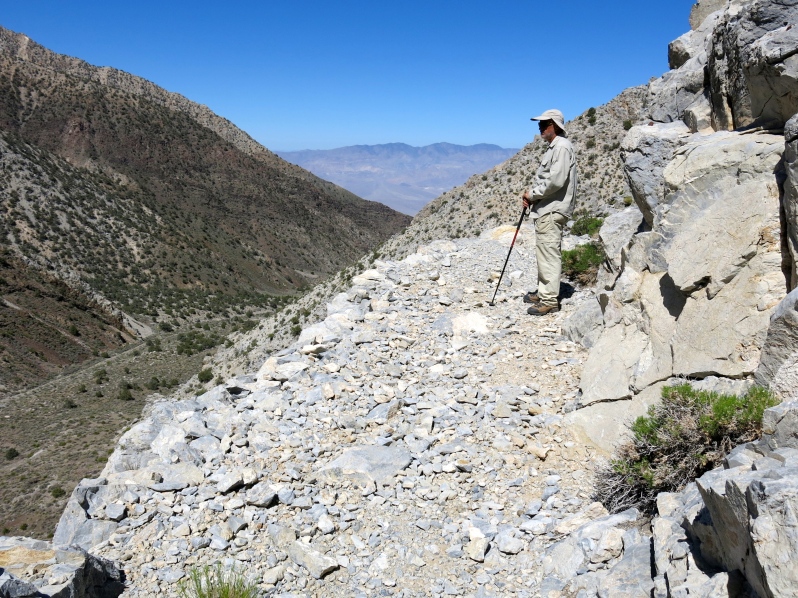 The entrance to a old mine. Note the blue-colored rocks (silver ore) in the foreground. 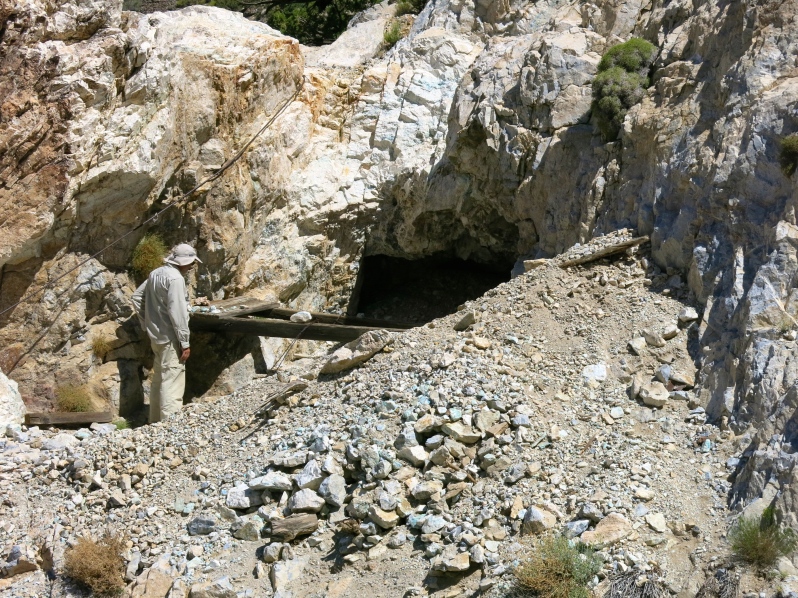 This mine had ore cars to haul out the diggings.

Even after Panamint City washed down Surprise Canyon in 1876, some mining continued. Inyo County maintained a graded road into the area until 1983 when a monster cloudburst and flash flood scoured the lower canyon to bedrock. Without a road, vehicles in Panamint City were stranded forever.

There are still a few cabins from the modern mining era in Panamint City. This one is known as the Panamint City Hilton, and you can stay there free. No reservations required. Hope you like mice. And hantavirus. 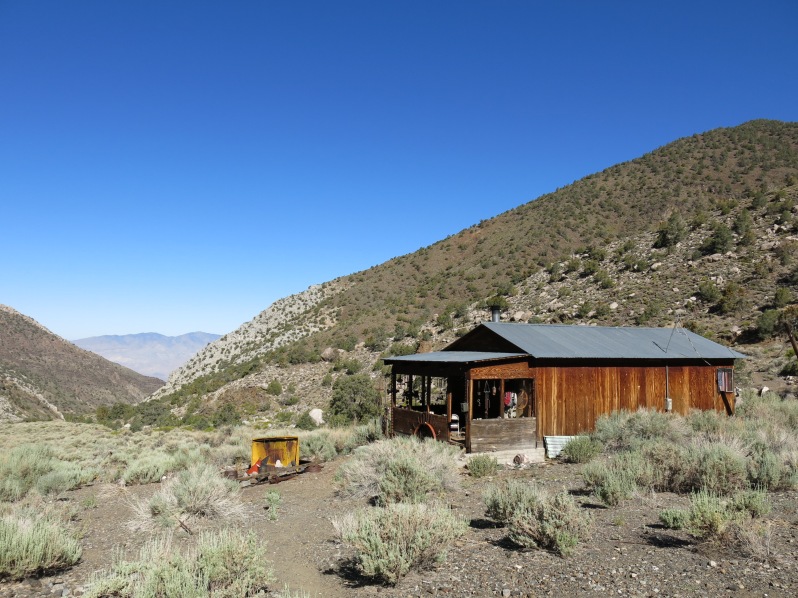 View from the deck of the Hilton. Imagine the sound of all that clinking, tinkling metal on a breezy day. 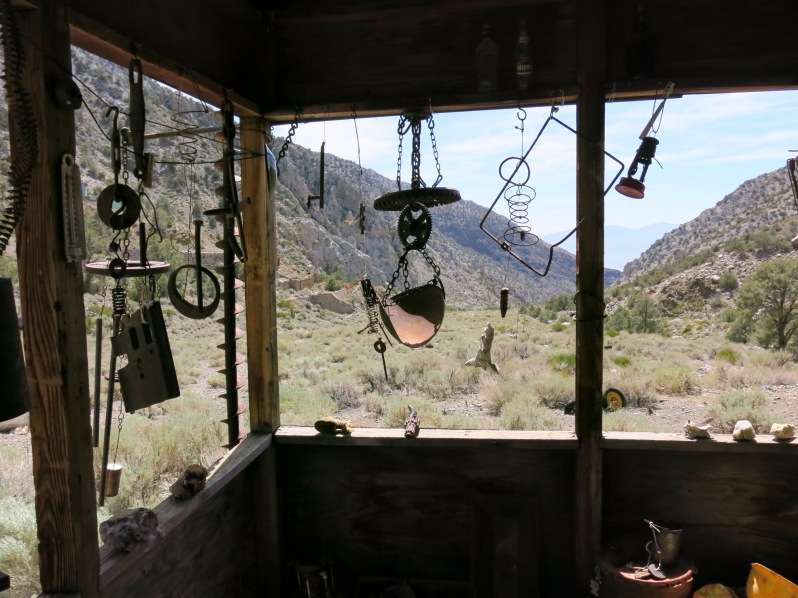 The porch of another canyon, this one well above the flood line. Who built this patio of bricks likely scavenged from the old smelter? Who planted irises?

Another cabin is well-loved and locked up tight. Who comes here? 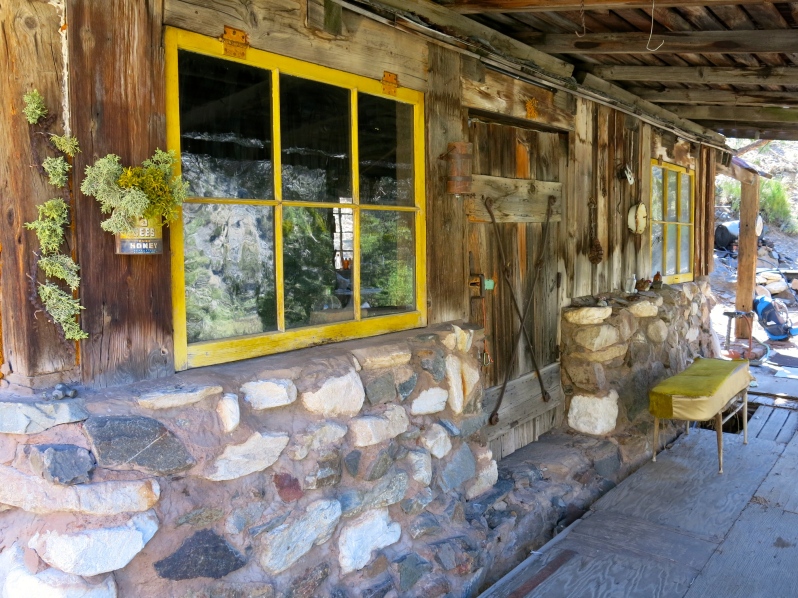 Plenty of refrigeration capacity, but surely there’s no electricity here now that all the mines have closed. 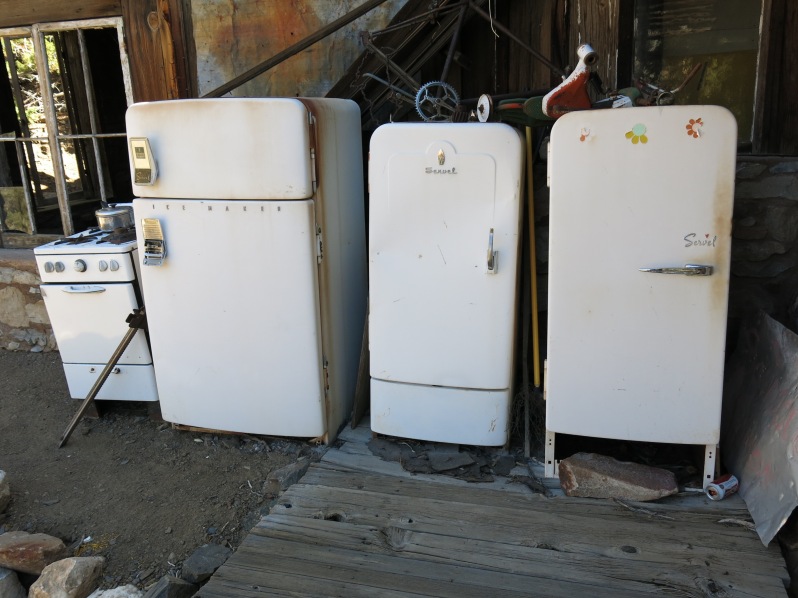 Even after the road washed away in 1983, Jeeps and ATVs made the trek up Surprise Canyon to Panamint City. Today the canyon is closed to all vehicles. The only way in is to hike up the surprisingly and hideously hot, steep, loose, gravel trail.

Our hike up Surprise Canyon was full of reptiles like this collared lizard (Crotaphytus bicinctores). What a surprisingly long tail he has!

And this desert spiny lizard (Sceloporus magister magister) that turns dark when its cold to absorb the sun’s warm morning rays. 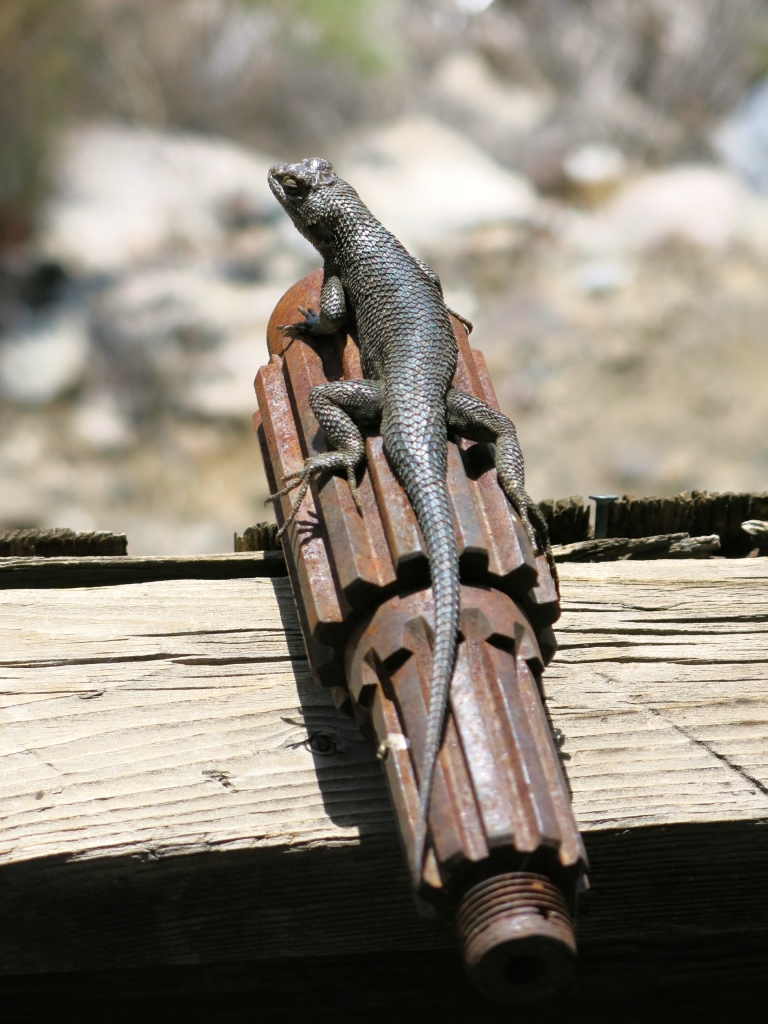 After two days and one night slogging around in the heat, Larry declared that he’d had enough surprises and headed for Moby.

“It’s a lot easier hiking down,” he said. 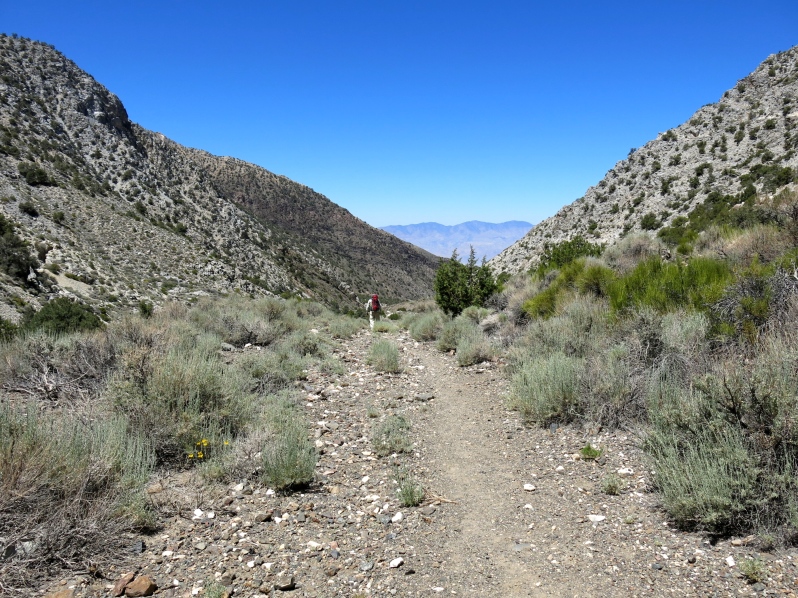