Janene teaches twice-weekly night classes at the community college here in Boise. This gives us 4 1/2 day weekends. Our trips often start when I pick her up after class at 9 p.m. and we head off down the dark highways. A couple hours later we make camp at some lovely spot. Anytime we head SW toward Oregon/Nevada country we choose this lovely spot, Antelope Reservoir. Actually it is an ugly mudhole. But it does have several critically redeeming features.

It is free, lonely, and has a pit toilet. That might not seem like much, but a pit toilet beats the alternative when nature calls on a freezing windy morning. 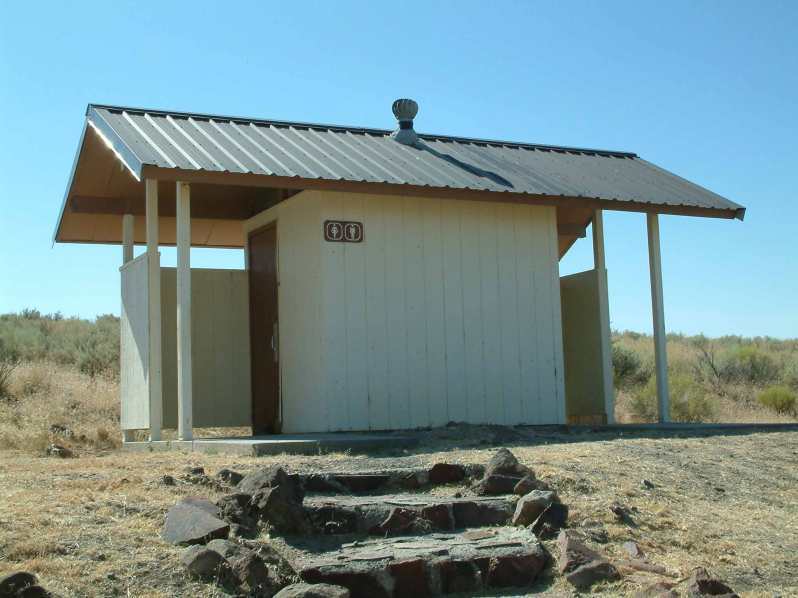 A bit farther SW just off Hwy 95 lies this forlorn, seldom visited monument to the 50th Anniversary of the  Taylor Act. 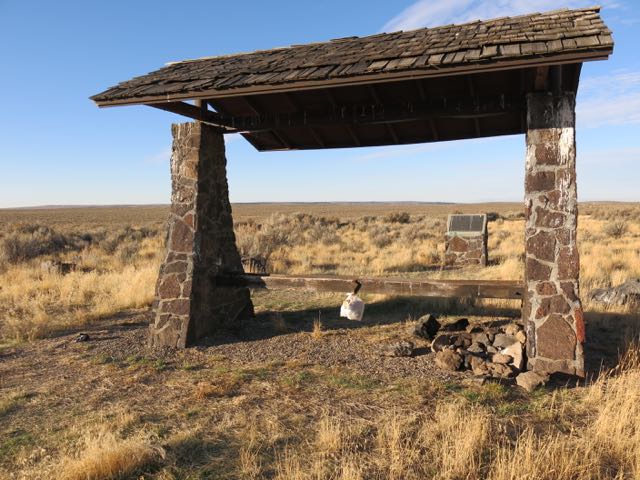 The settling of the arid West was often accompanied by massive overgrazing. Good land was homesteaded, and most landowners tried not to destroy their own land. But no one owned these wide-open spaces, so an effect known as “The Tragedy of the Commons” came into play.  Individual stockmen put out all the sheep, cattle, and horses they could, and the collective effect was to overgraze the land to the point that it was destroyed. Most of these once degraded lands are now administered by the BLM. The 1934 Dust Bowl era Taylor Act put these lands under the federal government control of the Department of the Interior so that grazing could be regulated. The Bureau of Land Management (BLM) was created in 1946, when the Department of the Interior merged two older agencies: the General Land Office, created in 1800 to sell off the public lands and encourage settlement; and the Grazing Service, created in 1934 to manage grazing on public lands.

If you are looking to drive the empty, arid west I suggest you rent a car in Las Vegas and head north on US 95 (in red below). Better yet, rent a Harley motorcycle. We see a lot of Europeans in the SW on their rental Harleys experiencing these wide open spaces.

But most traffic on 95 is truckers, and few turn off the  two lane highway to catch up on history. But Moby does. Once a fortress, Innskip Station is now just a pile of rocks in a farm yard with a scrubby tree growing out of it. Those darn Indians, what were they so upset about anyway back in 1863 . . . other than the usual broken treaties, theft of lands, and corrupt administration of the tiny bit of reservation lands they eventually were forced on to? Check out a brief bit of the tragic history of the Northern Paiute Tribe here.

No wonder the Burns (Oregon) Paiute tribal members found it comical and frustrating recently when Ammon Bundy and his followers seized the Malheur National Wildlife Refuge in the name of ranchers they claimed had lost the land unfairly to the federal government. Just how did Bundy think the ranchers got the land in the first place? Read more here.

Another victim of Walmart.

Another side road leads to another bit of history about a fellow traveler in these parts. Pompy, as Clark affectionately called baby Jean, ended his travels here 150 years ago.

Offerings at his grave would make a pretty good haul if there were any panhandlers at this intersection. There weren’t any.

We happened to be here on Veterans Day.Will this flag be flying here in another 150 years?

This nearby dying old poplar tree was planted long after Pompy was buried.

The coyote below was not napping. No one bothered to bury it. This is a common sight all over the West. Coyotes are “varmints,” fair game to be shot on sight, like the Paiutes were 150 years ago.

This corner of the West has a long Basque history. The Basques came over from Spain in the 1880’s and 1890’s seeking riches in the mines of Idaho and Nevada, but when that didn’t pan out they turned to sheep herding in the outback to make a living. Idaho has one of the largest Basque populations anywhere outside of Spain. They brought their religion with them, so even tiny little towns like Arock often have Catholic churches.

Arock was supposedly named in 1922 for a large rock nearby bearing Native American petroglyphs. 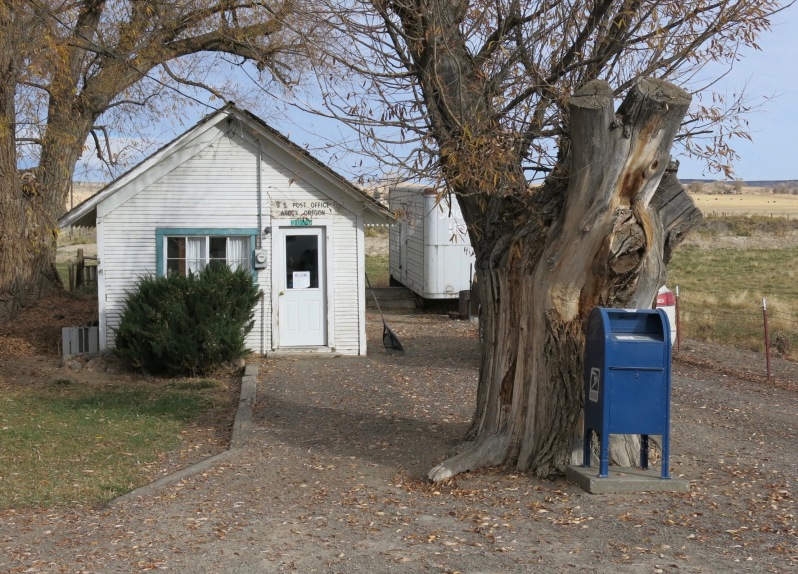 We made it a few more miles down Hwy 95 before trying to taking this turn. Most of the range land in this part of the West is BLM, and thus open to the public. Better quality grazing land,  fertile bottom lands, and land with water rights was homesteaded and is now private. According to my map this gate and all the land around it was BLM land, but it was locked, preventing us from driving where I had planned to go hunting. Then a rancher showed up, and said I couldn’t go through.  Once back home, my phone calls to the BLM revealed that he has grazing rights on the land, but had illegally locked the gate, so the BLM forced him to remove the lock. This happens all too often in the West, where local landowners try to prevent public access to our land.

Another forlorn monument appears, another whitewashed version of history. Poor Sarah Winnemucca. She tried to play by the rules. Educated, articulate, dedicated to her Northern Paiute tribe, she did all she could to help her people. She even went to Washington DC to lobby on their behalf. But the game was rigged, and she had no chance. Nor did her mother and sister, who were among the 29 women, children, and old men massacred when a Nevada Volunteer cavalry made an  unprovoked attack on their camp. The 1970 classic Bury My Heart at Wounded Knee is a must read for anyone who wants to know the details of the disturbing story of how Native Americans lost their lands all across the country. Read more here. The book has been in print for over 40 years, translated into 17 languages, and sold over four million copies. You should be able to find one.

These signs are everywhere all across eastern Oregon. I’ve seen them 200 miles to the north next to I-84, and this one was on a cattle gate across a road which probably doesn’t get 10 cars per day through it. There has been a decade long effort to get some lands in the nearby Owyhee river area declared a national monument. A well-funded and well- organized group has been fighting the designation. But the recent successes of the anti-government Bundy clan and the Trump election victory  will probably kill the national monument designation.

Finally, we reach our destination. For about 50 miles a series of small mountain ranges run north-south along the Oregon-Nevada border. We had four days to head west and tour the Oregon Canyon, Trout Creek, and Pueblo Mountain ranges, then north to pass by massive Steens Mountain. All told, a couple hundred miles of unpaved roads beckoned in Moby’s immediate future.

Or not. 15 miles into the backcountry a sharp rock (or perhaps a Paiute arrowhead) punctured a huge hole in a rear tire. Moby has an onboard air compressor, but that did no good as the hole was too big even for the plugs in the emergency repair kit.

Too chicken to risk another couple hundred miles of lonely rocky roads without a backup, I put on the spare and we retreated back to Boise. The flat was damaged beyond repair, so the next day Moby got one new shoe.

Right back home where we started. 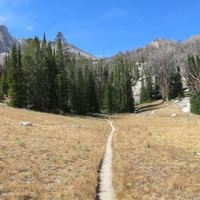